skip to main | skip to sidebar

Experimental writing is only private action.

This title sums up a mainstremist (?) prejudice and shallow attitude toward writing that interrogates the formal arrangement of language. I speak to this as not a new phenomenon or attitude but as an observation directly relating to my own current practice as a young writer.

I recently developed a piece of writing that experimented with sentence formation for Sam Rountree-Williams solo exhibition currently showing at Newcall Gallery. I had expressed doing writing for the studio-based collective as I saw them in keeping with some of the things I am doing in my own practice. Sam approached me to write for the show, and I feel our pairing worked really well in terms of the proximity of some of our ideas and ideas for articulating them (in paint and in writing). My piece specifically emerged from a series of discussions with Sam as well as the writing/language studies I am currently undertaking and poets I am reading. (I would undoubtedly cite Leslie Scalapino as my main influence - spurring these thoughts and how I could consider writing them - but there are so many others).

The writing was described by one funded art blogger as "waffly" and "impenetrable." I differentiate Hurrell's blog from his other writing because I am not familiar with it and assume there is a difference in terms of critical content and form. While I understand that my writing is difficult to "digest wholly" (assuming that's what readerly penetration does and highlighting that in fact my piece purposely resists that), he offered no commentary on why he thought this - as if it explained itself. I am interested in what constitutes as "waffly" and what the referent is precisely in my piece - he does not talk either of these things.

It's not that I expect I won't receive remarks like this, but want to point out the way in which his comment denigrates and voids my writing as a valid interpretation and experience of Sam' work. It also blatantly assumes clarity is both always being "self evident" and that isn't something we should be interrogating.

Hurrell finds my writing frustrating in its refusal to offer a singular meaning for a reader(?) It slides deliberately to configure multiple meanings and senses of Sam's work (as in I could not write that in a straight forward way because I wanted the reader to actually experience that in the writing - so it had to be distinct from the normative way of communicating with people). This textual openness I agree is so unlike the majority of art writing that legitimises an art experience via one's ability to categorically situate the work or connect it to "movements" and other practitioners (describing the viewer's experience to them?)

It surprises me also because I am directly speaking about an idea that has been articulated by so many (phenomenologists, quantum physics, Zen, Cage...) and I focus on that particular thing throughout the piece - it is not divergent in that sense I am talking about many different things. So I am both sustaining attention and versioning the same points (so in a way what I say does not change, but also changes) allowing the reader "to get a hold of" what I am saying without tying them down per se.

Sam's show runs from 15 October - 1 November. Copies of my piece are available from Newcall Gallery and on their website.
Posted by A Sleepless Night (Standing) at 2:13 AM 44 comments: 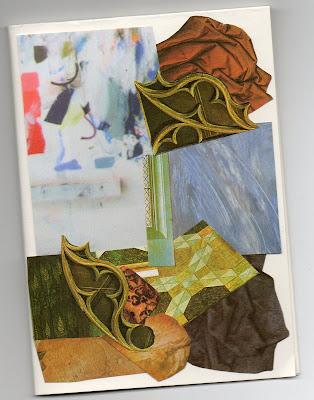 Posted by A Sleepless Night (Standing) at 2:36 AM No comments: 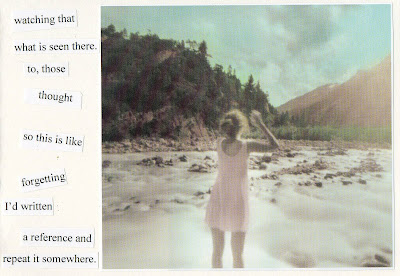 Posted by A Sleepless Night (Standing) at 2:31 AM 1 comment:

These lovely people read their poetry:

xE
Posted by A Sleepless Night (Standing) at 7:50 PM No comments:

Each other, floating & glancing - writing about writing

Chap*books features a review of Winterling Series One (my two self-published chaps) - in the chapbooks 26 post. This wonderful blog is dedicated to chapbooks - a really important form of publication for emerging writers. The author of the blog (Steven) writes entries tracking his thoughts about chapbooks he collects (or is given). I happily facilitated a great chapbook swap with Steven - the observations of my writing are interesting and of course, I appreciate the encouraging, supportive comments. Thank you! xE
Posted by A Sleepless Night (Standing) at 4:27 PM No comments:

let thermal expression be syntactical. The natural is what


There was him, as if in front - not unlike sensed
them


small spots, more blotchy (that is like spiky-edged)
across the way
assigned - overlaying them

of one (them?) stepping forth / from out
or underneath it.


Covering placing - there is - range.
Posted by A Sleepless Night (Standing) at 2:50 AM No comments:

as occurring, alongside the expansion of:

torn pages, rewritten face, (a face is interesting).
Posted by A Sleepless Night (Standing) at 8:28 PM No comments:

Anyone interested in receiving Winterling chapbooks as part of a gift exchange - please email me! I am interested in trading my chapbooks for other chapbooks, materials, paper supplies, interesting ephemera, random collected things, lovely bits...

I am currently trading two self-published chapbooks -Winterling Series One - As For We Love, At The Instant As Being Entirely Different From It. & there is always the impossibility of being able to move sideways. Both chapbooks come in a handmade packette, including some other lovely bits, paper art and ephemera.

I would love to hear from anyone - poets, writers, artists, readers, crafters and happy people - who would like to be a part of this new-ling poetics community!

Her back becomes the heat flower in the skull frame, this is the space they left for them and she is resting on the door frame.

Breathing sounds like desire, she flakes off longing, shedding skin from old sun burn. Sunburnt on the door frame, air is expelled and her body is resting against the door frame, the side of her skull resting on the frame.

- Extract from The Heat Flower by Emma Phillipps. 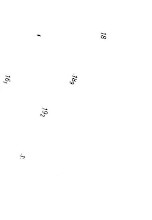